Brody: What day is this?
Hooper: It’s Wednesday… eh, it’s Tuesday, I think.
Brody: Think the tide’s with us?
Hooper: Keep kicking.
Brody: I used to hate the water…
Hooper: I can’t imagine why.

Today is the last day of the shoot in West Wales. (There’s one more day’s filming, at a special underwater tank in East London ). It’s an irony fitting of the finale to such an “incident” filled shoot that around mid morning Kelly Broad comes on set to whisper in my ear that she’d had the call we’ve been waiting for. We have now finally ‘closed the finance’.  In other words we can now go ahead and shoot the film. Kelly and I laugh

Luckily the crew have only needed to concentrate on the job in hand. But while we are all fitter, stronger, very tanned (unbelievably) and have found a great rhythm, I can also see that everyone is tired.

The cast in particular have been amazing, uncomplaining and have lead the effort with their talent and resolve. But being together as these four characters in EVERY shot has taken its toll. A couple of nights ago, in a scene where they discuss the after-life while stoned, we all politely waited as Tom Burke gave a particularly long dramatic pause before saying his next line. The camera rolled on and on before JJ finally looked round at him and realised he had fallen asleep in the middle of a take. He awoke at the sound of our laughter and calmly said “Oh. Is it me?”

Last night we shot the last scenes on beach itself. Benedict crying out in pain was truly disturbing. The chilling sound echoed out into the night across the bay.

Not since I finished writing it have I been really alone. I love being part of a crew. But the day after Wales Wrap it’s just Kelly Broad and I left to clean ‘the Manor House’ at Stackpole – our unit base. I found it nearly four years earlier and now while packing it up the sadness really hits me. We dismantle the phones and pack up our numbered mugs. We empty the costume rooms, the make-up rooms, the Greenroom where the boys ate so many odd breakfasts and empty the fridge in the kitchen where we ended so many long, hot days with cold beers. The rare horseshoe bats that live in the attic will have it to themselves again. 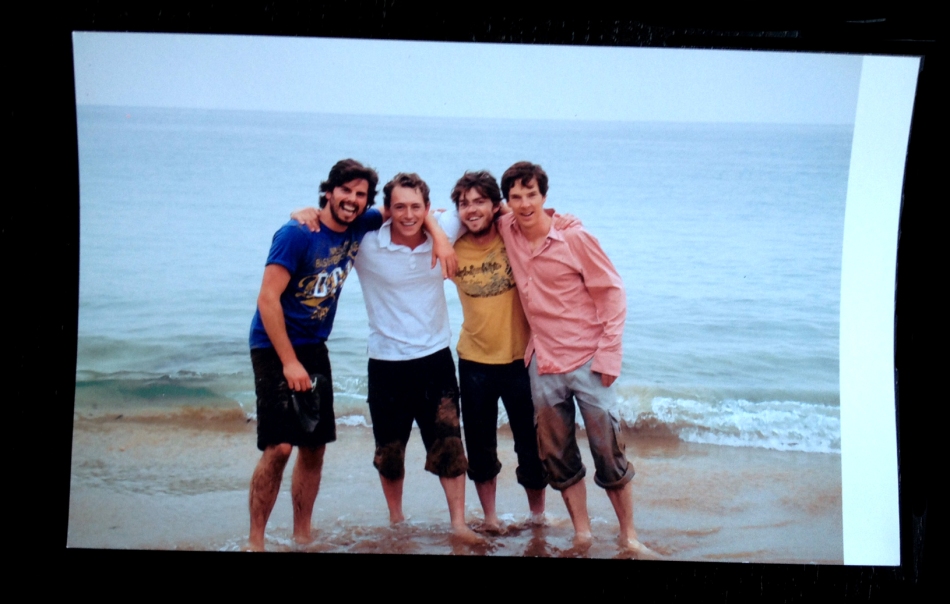 Every so often one of the crew stops by to pick up something or leave something with us before they head back east and to their next job. We thank them for all their hard work and hope I’ll have them on a film-set again soon.

I hand the keys back to the guys from the National Trust. “Well, you were lucky with the weather anyway…” Yes. Yes. Yes. We were.

At last – I take down the banner that hangs over the door. I roll it up and toss in the back of my mud and manure-caked Land Rover. It reads “Welcome to Barafundle Bay”.

I pick up Benedict from his cottage and we leave the green and blue of the West behind us. As we drive I start to face the battles ahead – to turn our footage into a film and then get that film released… Fuck. There is so far to go. Then my phone rings.

One of our assistants, back in London already, tells me that Tom Burke was dropped at a train station in Carmarthen and then found that he’d lost his wallet. He has no ticket and therefore no way home. (Over the next two years I will discover on my travels with Tom that this not an unusual event.)  Forty-five minutes later I pull off the road and collect him from the roadside. Another companion for my return to the Big Smoke.

Benedict looks into the back. “He’s asleep…”

“Oh… So  what about you, mate? You got anything else lined up?… Hm… Well, lets chat about it. We have plenty of time now…”