Despite nearing the end of the shoot it seems I am still the only one who can draw out cash for the film’s daily expenses. With alarming regularity the production office tell me to go and withdraw about seven grand… sometimes ten!

This is annoying as it forces me to leave the set for half an hour or so, which I dare not do, or it means I race off during lunch – which means I don’t get to check-in with people and our daily problems… and I don’t get to eat! (Our caterers are amazing and I love and NEED lunch.)

Today the call for cash was urgent so I raced into the nearest town to get the money. The first time I did this, a few weeks ago I learned that withdrawing seven thousand pounds on a normal Wednesday afternoon from the Barclays Bank in Pembroke is not possible.

The teller laughed and called other staff over to laugh at me as well. I stood there, dusty and tired, missing lunch, holding open a cotton sack and glancing furtively at my watch.

At this point it was starting to sound more like a hold up than a legal withdrawal, but with less satisfactory results. After much debate they worked out that if I raided another two branches I would be able to make up the seven grand. They phoned ahead to warn them of my arrival… from another world. Film world.

Anyway – we have learned to order cash in advance, but it still annoys me that I have to leave set today to go into the bank.

While on my way there I suddenly come over the brow of a hill and a rare sounds echoes through the Land Rover. My phone is ringing. I have barely had a signal for nearly five weeks so this is an event.  But it’s not good news.

“Vaughan – you need to come on set. The council have turned up and shut us down.”

We are filming at Freshwater West today. A stunning beach where filming for Robin Hood and Harry Potter also occurred. But to be exact – at the moment we are doubling up the location and using the interior of the toilets in the car park (where JJ Feild is meant to have his Rolex stolen by the Angel Boy). Apparently a cleaner arrived. Didn’t know anything about us and called his boss, who called his boss, who sent a man in a van with an order to cease and desist or the police would be called.

I won’t bore you again with the ‘time vs money’ problems of this shoot but suffice to say THIS. CANNOT. HAPPEN.

I skid to a halt. The crew are sunbathing around the dunes besides the car park above the beach.  Benedict is in costume playing frisbee with some of them. In the centre of the car park is a Pembrokeshire County Council van. A  tall man who is “just doing his job” is leaning against it. 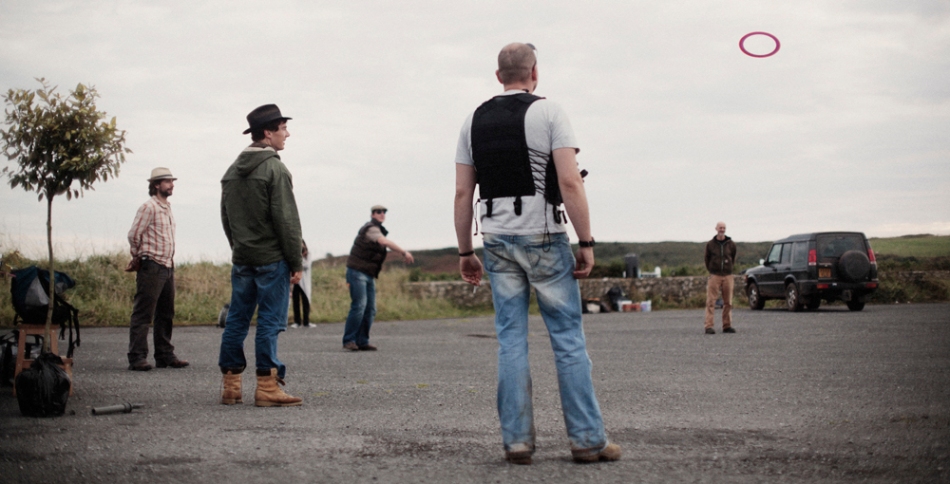 My arrival causes some stirring in the crew. Whatever I am about to do I’d rather it didn’t have the audience, but it can’t be helped.

I walk towards the man, let’s call him Steve… I actually think he was called Steve… So let’s call him Dave, and as I do I try to work out something, if possible, about him, to help formulate a plan for my approach. I am no Sherlock it seems – and I’m getting closer – so, for some reason, with tone that suggests I’ve missed him terribly – I say “Hi there! How are you?”

Though as a desperate producer I am prepared to bend my morals in this encounter I decide the moral high ground is one I’ll try first and I begin with the most abject apology for wasting his valuable time. His expression softens, but I realise he is also now considering how valuable his time that morning actually is, and that perhaps, hanging about in this car park is… well… a fairly normal use of it.

Nevertheless – that I value it more highly than Pembrokeshire District Council intrigues him if not endears me to him.

I shepherd him to our catering truck and soon a coffee is in his hand. I have made the necessary call to our location manager Tom from the car on the way and Tom assured me the suitable permissions will be in place asap. The problem is that there is no evidence at all of this and this ‘Dave’ – not only the guardian of the toilet, but currently holds the completion of the entire film in his hands.

I can’t recall exactly what I said, but I know it was in the vain of Ford Prefect in the beginning of The Hitchhikers Guide’ convincing the council Rep’ to lie down in front of his own bulldozer so Arthur Dent could take a break from protecting his house.

I basically managed to confuse the timing of the necessary phone call he would get with the message that we can recommence filming, with the act of our actually recommencing the filming. I was verbally back-dating  the former with the latter to make the latter possible immediately, as the former was of course ‘a forgone conclusion’, which therefore made his staying here only a further waste of his time, as we would be already be filming anyway, ‘though of course he is welcome to stay and watch! Love to have him there!” – but it would of course mean that he was unable to drive away to get a signal that would definitely mean he could receive the phone message that gave us permission to recommence the filming, which we were already doing…

He scratched his head. I made fast circling motions with my hand behind his back – the signal to the crew to recommence filming.

A short while later, as Dave drove away with some cake, our breathless location manager (dear Tom Jenkins) turned up with news that we now had the permission to use the toilet and explained how the error had occurred (not his fault at all for the record.) It didn’t matter. We had dropped a few minutes, no more. And the scene was being completed.

As the First called lunch I sighed and got back in my car. Co-Producer Kelly stroked my head. “Well done. Where are you going? “

As I drove out of the car park again I remembered the words of Douglas Adams, one of my favourite writers; “Time is an illusion. Lunchtime doubly so.”