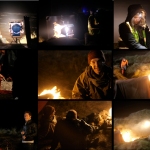 For nearly the whole shoot we have had the four guys together (as the script requires). This has been nice in one way – but early on we became aware of the problems of constantly shooting a ‘dinner party’ in terms of angles and coverage. On many occasions, with things happening so slowly, I wished the idiot writer, had foreseen this and written a few more scenes with just two guys talking…

Today however, we’re on Freshwater West and JJ Feild and Benedict Cumberbatch have a moment alone together. So, I go off with Adam Robertson and Tom Burke to film some stuff. Our second camera/B crew have been totally amazing throughout – great characters who created their own infectious team-spirit. As well as being the second camera for the scenes of the four stars, they  have also captured so many great shots of the doubles enjoying the miraculously warm weather. (In fact earlier on they nicknamed themselves  “28 Sunsets” as they set out in a 4×4 to capture the “magic hour”  of every evening in the schedule.)

So we’ve run both cameras pretty much all day, every day. Our camera department budget, and most alarmingly our film stock budget, has doubled. With my producer-hat on I had to explain this to our financiers, but when they saw just some of those sunsets they seemed happy… No that’s a lie. Not happy. They just didn’t shut us down. “They seem happy! Let’s move on…” is just what I told anyone who asked about it.

Today I get to muck around a bit though, getting some stuff of Burke dropping little pebbles in a rock pool contemplatively – only to have Robertson drop a boulder into it from behind him. In doing his shock response Tom makes the most hilarious roaring noise – once again proving his comic genius.

These scenes are nearer the end than the beginning of the journey and over the next few days we will shoot some of the saddest, as the shoot draws towards a close. But tonight we film a firework display and the comedy of the camp catching fire. It’s a long night. The hours I spent in the script wondering how we will manage to shoot this mishap are about to be answered. 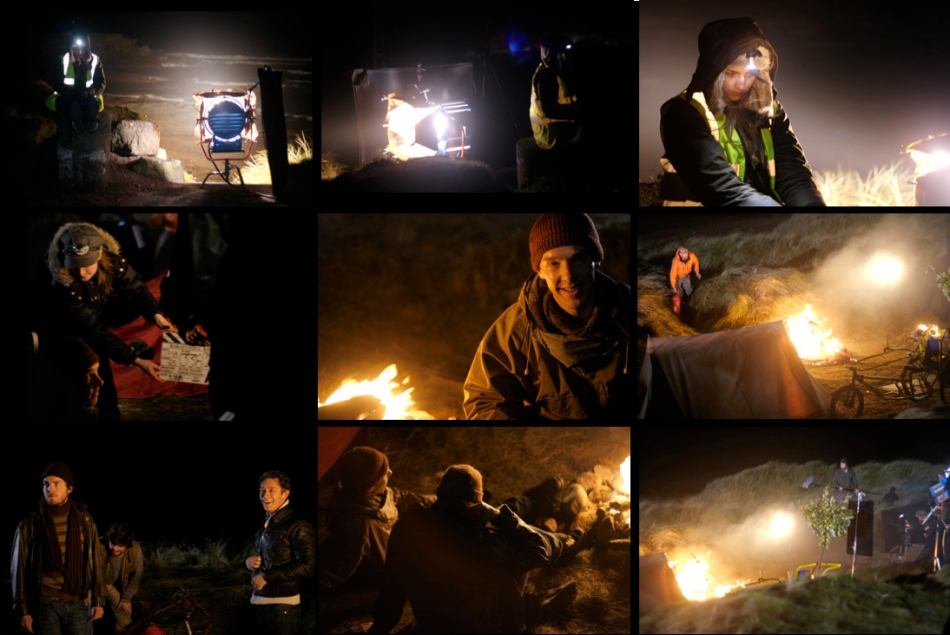 We are now well into October. The temperature drops. We huddle in the dunes as the last flocks of birds leave for sunnier climbs. Darkness descends and the props guys send a rocket down a wire into the tent, treated with fire retardant to make it burn slow enough to catch on camera. (It still goes up in seconds)

Then we shot the actual fireworks. JJ, Tom and Adam are brilliant fools on and off camera and, as he watches the ill-judged display above them (a section of the script I titled “My Firmament Falling Down” in a very early version) the look on Benedict’s face  pretty much says it all…

By midnight it’s freezing and as we pack up for the day and hurry to warm cottages, I’m aware that the gracious welcome of this coast may be about to run out.

“If I said you had a beautiful body would you hold it against me?” The Bellamy Brothers. And the ferry man from “Barafundle Bay”

We’ve moved further up the coast to a deep rocky cove called Martin’s Haven, where real little ferry boats cross to some of the islands off the Pembrokeshire coast, where people go bird-watching.

We are shooting the scenes of the boys meeting a strange man selling tickets for the ferry and the scenes on the ferry itself where James (Benedict Cumberbatch) will have a heart to heart with the skipper.

In reality one doesn’t need to cross a ferry to get to Barafundle Bay, but I wanted the journey to have the hint of being an odyssey and meeting this ticket seller (an archytypal gatekeeper) and then the ferryman (an ancient symbol of crossing over from one life to the next.) is part of that goal. I love the idea of these double meanings and symbols throughout. I almost want the boys to look back at each incident and ask themselves if it really happened. By the end of the story the greater questions of whether they should go on or turn back, help James or not, live one way or another are at the heart of the film.

As we build the ticket sellers hut, a shed with a neon sign, plonked on the beach, a young seal rolls around on the shore at our feet as if shamelessly hoping to be cast.

Karl Jonsonn is the ticket seller. He steps into his shed dressed as a gruff old sea dog, but wearing full eye make-up and suddenly looks as though he’s been there for years.

His scene goes well. He and Tom Burke have known each other a long time and off camera they stay in character being funnier than I could ever write them.

When the scene is done we say a reluctant goodbye to Karl and the boys head on to the ferry.

On board, while the other boys fool about, James and the Ferryman (played by the lovely Welsh actor Phillip Madoc) get into a chat about the journey of life. They share something. Neither have long left.

I want the scene to try and remove some of the sentimentality from the script by saying that searching for the definitive answers to the strange questions that life throws up is utterly pointless. Neither man knows what is coming next, neither believes in a higher power necessarily, but the ferryman has worked out that most of the complications we meet are not worth thinking about for a single moment.  Finally James asks him if he has had a good life. The ferryman thinks and says “Yes – But then I never asked much of it.”

In between finishing a new script for the Western Edge slate I am sitting doing this Mug7 post. I have reached day 17 of the Third Star shoot diary – the Ferryman scenes. Just reading the call sheet takes me back to the highs and lows of that day in an instant.

The fact is that the film is out on DVD and the ferryman does not appear. It just didn’t work in the final film for many reasons, so we cut it and only the ticket seller remains. The hours spent writing and re-writing the ferryman, the hours casting and filming are all on the cutting room floor.

The ferryman was in the script of ‘Barafundle Bay’ (you can read the scene in the script I posted here ). He isn’t in the film I made along with over a hundred other people – which became ‘Third Star’.  In a different reality what difference would this scene have made? Is the film better or worse?

I honestly don’t know. But, what strikes me is that worrying about it is exactly what the ferryman was talking about.

Instead of thinking about it I can choose to remember something else that happened that day.

Despite our cameras and equipment, the neon sign above the funny little shed and his eye make up – a small group of ramblers, genuine members of the public hoping to go over to Ramsay Island, waited, patient and enthralled, while we finished a take and then gingerly stepped forward to buy a ticket from Karl. He duly obliged. Then they made their way to the boat…

I don’t know what happened then. Did we pay them back? I hope so. But it was a bizarre and hilarious incident that is also absent from the film, but where, very briefly, it came alive for us thanks to Karl’s performance.

Film making is great for encouraging the act of ‘moving on’.

In writing, every scene should simply fulfill the need for the next to exist.

Every day shooting on set you have to be thinking in some part about the next. And every film is more experience towards making the next one better.

When problems nagged at me on set, I could watch the boys pushing the cart and it would strike me that life really does go in one direction. Better keep walking…