There is definitely something alien about Benedict Cumberbatch. This was exaggerated the first time we properly met. He arrived late, he often is, but with the flurry of apology that he means utterly, and sounds faintly bored of having to give so frequently. He was wearing his crash helmet and wet weather biker’s jacket. It was a modern style so had the moulded Kevlar pads and bumps that shaped his body like an exoskeleton.

He is immediately intelligent. He’s on his front foot and yet asking questions. One instantly gets the impression there is no depth to any conversation he is not willing to plumb.

Over the long casting period we discussed with him many times, which of our four leads he could play. What makes him different from most of the actors we saw was of course that he can play so many different parts. Again it’s the hint of ‘shape-shifter’ that gilds his gifts.

At first I was loathe for him to play James (thinking he may play another role). I felt that having become well known for playing Stephen Hawking so brilliantly he would be perceived as some sort of a “rent-a-cripple”… But there was something I needed in James that so few people could portray. And of course Benedict understood it immediately, which is why he is one of the great actors of his generation. 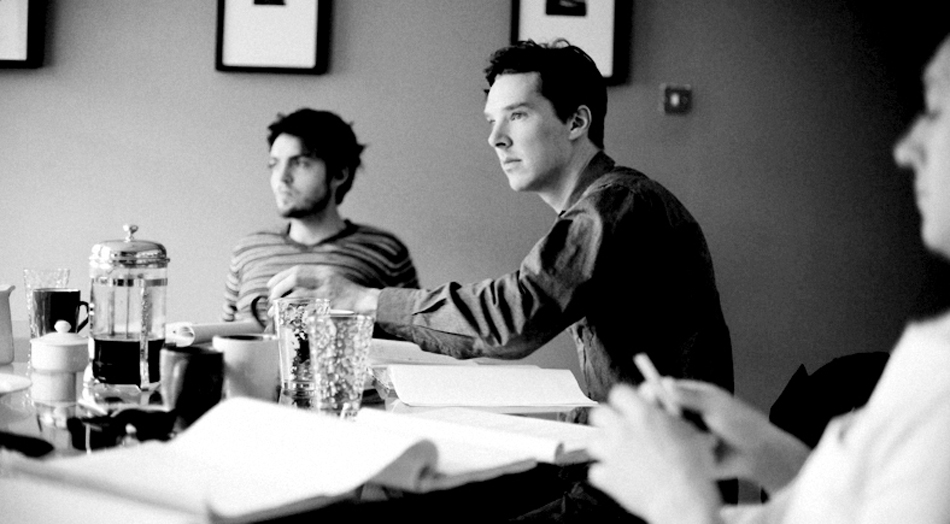 James is a hero. We have to love him. We have to understand why the boys love him and will go to the extreme they do with him… But he’s also a bit of a pompous dick.  I like to think this is what makes him believable. All these characters have flaws because we ALL do.

But it takes confidence and belief, total artistic commitment and an amazing lack of vanity for a young actor in his first real leading role to know that he can play this character on the edge of likability and get away with it.  Of course Benedict does.

The ability to play these complications is another matter. He is of course just a brilliant actor. All the boys were.  For me his most impressive ability, as I have said before, is to be technically brilliant, while all the while looking as though there is nothing but gut reaction going on. Watching him physically train to play James (He dieted, ran the cliffs and swam in the cold sea), and also delve into the meaning of every line in rehearsals, and then plot the effect of his illness on his body and mind as it would be in each scene (shot in the wrong order), while all the while being a joy to be around was impressive to witness. To see it as one performance in the final cut was remarkable.

He is rare even amongst the acting breed. If the character description says handsome: he is.  If it says Nasty: he is. Older: he is… Younger: he is. For this reason I just can’t wait to see what he will become.

Working with him was a delight. I learned so much. It was so often easy to see what he was like at ten years old. He’s a giggler, and a brilliant mimic and, like the other boys, he thought nothing of carrying kit up the steps from Barafundle Bay, even after having been on camera all day.

When we cast him in Third Star, his role in Sherlock was yet to make him the global star he is now. This of course did so well for us in to one respect and yet his schedule, by the time we released, made it impossible for him to do enough press. Fame had swept him up.  And yet, when we talk, I am really aware that he is enjoying it by revelling in the experience of the work far, far more than any of the perks of it.

One evening long after the shoot he called me to ask if he could come to my home to watch Have I Got News For You.  “Sure. Why?”

“Because I’m hosting it?”

I sat and watched him watching himself. He was thrilled that he “got away with it”, that his suit looked nice; that his memory of people laughing at the right times, on and off script, were real. He was edgy throughout and so relieved when it was over. It was strange to see him so effected by it at first– but of course I realised he was having to be himself. Like the great chameleons of the stage and screen, having to decide on a version of himself to go on camera was a risky business for him.

I’m not sure to what extent that was a turning point, but throughout that period I really felt he had to adjust to life as Benedict Cumberbatch in some way – and he found his feet.  Whatever personal doubts he had had, that were inaccurate, are far fewer now. Being really appreciated for what he does best has made him happier in his own skin… So he can spend the rest of his life enjoying wearing other peoples.

This entry was posted on September 9, 2011 by mug7. It was filed under Third Star and was tagged with Actor, Barafundle Bay, Benedict Cumberbatch, Cast, Casting, Crew, Filming, Have I Got News For You, Movie, Mug 7, Pembrokeshire, pompous dick, Profile, Sherlock, Shoot, Star, Stephen Hawking, Third Star, Vaughan Sivell.